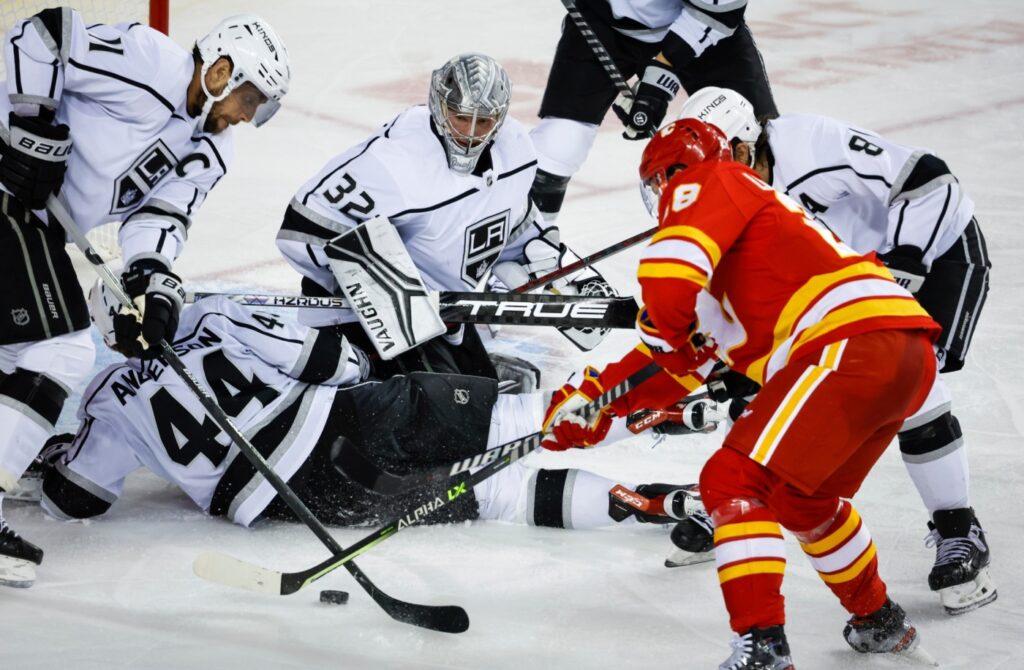 The Kings will return to Edmonton on Wednesday for the first time since their Game 7 defeat at the hands of the Oilers in May’s first round.

The Kings led that series 1-0, then were blown out in consecutive games before recovering to take a 3-2 series lead that ultimately slipped through their fingers.

While it took time to move past the sting of being shut out in a decisive game, the Kings will have to put another more recent disappointment behind them quickly, that of a 6-5 loss to the Calgary Flames on Monday.

The Kings clawed and scraped their way back into that game, in which their puck management, line changes, faceoff coverage and overall attention to detail were “shoddy,” according to Coach Todd McLellan. Even so, they nearly forced overtime in the final minute of a bid to extend their four-game winning streak.

“I don’t think we should lose sight of how this game evolved,” McLellan said afterward. “Just because we fought back and made it 6-5, there are a lot of things that we have to fix.”

With a quick turnaround to face perhaps the two most dominant players in the world, Connor McDavid and Leon Draisaitl, the Kings will only really have time to refocus ahead of the match.

“Our start has got to be better. Defensively, we have to be better, move the puck quicker and we have to get open. All-around game, I think (has to improve),” said center Phillip Danault, who suggested the Kings could build off their third period.

For the Oilers, McDavid has vaulted himself to new heights following his magnificent postseason, wherein he led Edmonton to the conference finals for the first time in 16 years.

His start has seen him compile 32 points in 16 games. If he maintains that pace, he’d be the first scoring champion to average two points per game or better since Pittsburgh’s Mario Lemieux in 1995-96.

Draisaitl trails McDavid by just four points as the duo continues to occupy the familiar positions of first and second in the NHL in scoring.


Kings prepare for start of road trip in Calgary

Winger Evander Kane, who had seven goals in seven games against the Kings last postseason, including five in Games 2 and 3 alone, will not be in action for the foreseeable future. He underwent emergency surgery on his wrist Nov. 8 after being cut by the skate of Tampa Bay forward Pat Maroon, and will miss at least three months.

Former Kings goalie Jack Campbell finally signed a starter’s contract, five years at $25 million total, with Edmonton this offseason. Things haven’t gone according to plan. Though he has won six of 10 starts, his 4.27 goals-against average and .873 save percentage better reflect his abysmal performance since leaving Toronto for Edmonton.