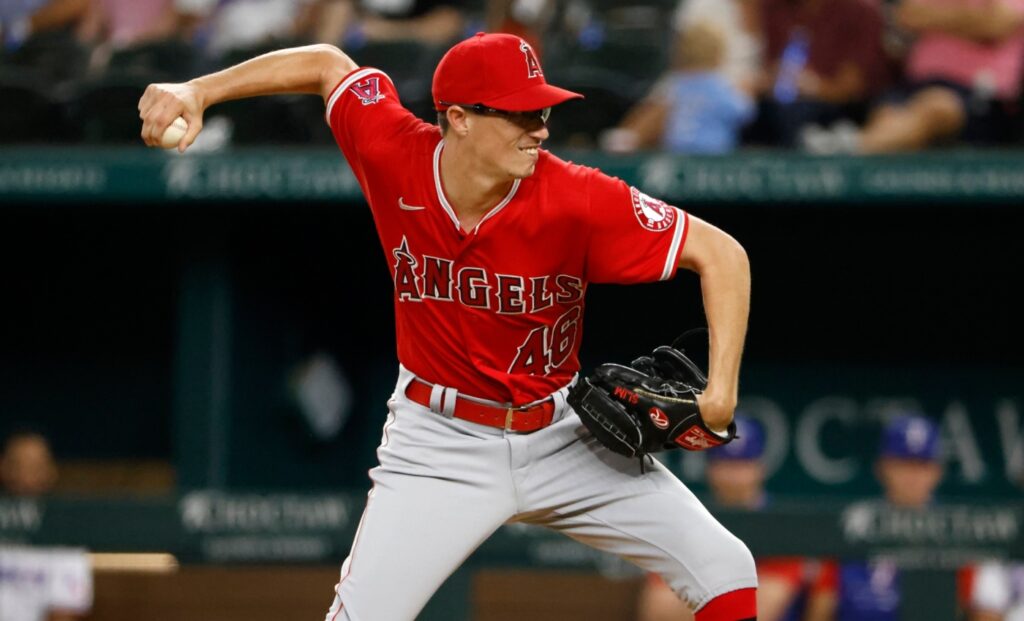 ANAHEIM — Jimmy Herget has stepped to the front of the committee that the Angels’ bullpen became after Raisel Iglesias was traded.

Lacking an established closer, the Angels have mixed and matched to close out their games, with Herget, Ryan Tepera, Aaron Loup and José Quijada each getting opportunities.

Herget, however, is leading the way with eight saves. He has a 2.30 ERA, including an 0.59 ERA in 22 games since Iglesias was traded to the Atlanta Braves.

Asked what’s been going so right for him lately, Herget had a simple explanation.

“I would just say confidence,” he said. “Just attacking. Obviously, earlier this year, I was attacking a lot as well. I was getting some unfortunate hits here and there. The last two months, just attacking with everything. Just let them hit it. See what happens and it’s worked out.”

Herget does not have the luxury of a 100 mph fastball or a wipeout breaking ball to get hitters to swing and miss. He throws a two-seam fastball around 90 mph, but about 70% of his pitches are sliders or curveballs. His whiff rate is just about average, but he’s still kept hitters off balance enough to get 8.2 strikeouts per nine innings.

“At the end of the day, it’s just missing the big part of the bat,” Herget said.

Herget slings the ball from a release point that is between sidearm and over-the-top, which makes him best suited to getting out right-handed hitters. Righties have hit .176 with a .489 OPS against him this season, while lefties have hit .215 with a .650 OPS.

“It’s awesome,” Manager Phil Nevin said. “We’ve been fortunate enough to have some of those right-handed lanes for him. Not that he can’t get lefties out, but you know when you see a string of right-handers in a row like that, the way Jimmy’s delivery is, the deception, you like your chances with that. It just happened to be in the ninth inning a few times.”

Herget, 29, has been one of the pleasant surprises of the pitching staff. The Angels picked him up as a free agent after he was released by the Texas Rangers last August.

He still has another year before he’s even arbitration eligible, so he could be a low-cost part of the Angels’ bullpen for a few years.

Whether he remains in a high-leverage role depends on who else the Angels add to their bullpen this offseason.

For now, Herget is enjoying the chances he’s getting at the ninth inning.

“Closing is great,” Herget said. “Everybody wants that opportunity, especially in the ’pen. Everyone wants to have the chance to close the game out. It’s been fun.”

Outfielder Mickey Moniak’s season came to an early end because of a left hand contusion, the result of a pitch hitting his hand and the bat during Wednesday’s game.

Moniak has been on the injured list three times this season, all after getting hit in the hand or finger by a pitch. He broke his right hand at the end of spring training with the Philadelphia Phillies. He then fractured the middle finger on his left hand about a week after the Angels acquired him.

The Angels replaced Moniak on the roster with infielder David Fletcher, who had been out with a bruised right hand.

It left the Angels with just three true outfielders for the final seven games of the season: Mike Trout, Jo Adell and Taylor Ward. Luis Rengifo, Matt Thaiss and Fletcher also have limited outfield experience in the majors.

Right-hander Archie Bradley also hit the injured list for the third time, ending his season. Bradley had been out for three months with a broken elbow, and in one of his first throwing sessions after being activated he felt tightness in his forearm, which was diagnosed as a strain.

Bradley, 30, completed his only Angels season with a 4.82 ERA in 21 games. He said earlier this week that he’d like to re-sign with the Angels.

The Angels called up right-hander Nash Walters to replace Bradley. Walters, 25, has never pitched in the majors. He had been in the Milwaukee Brewers’ system before the Angels picked him last month.