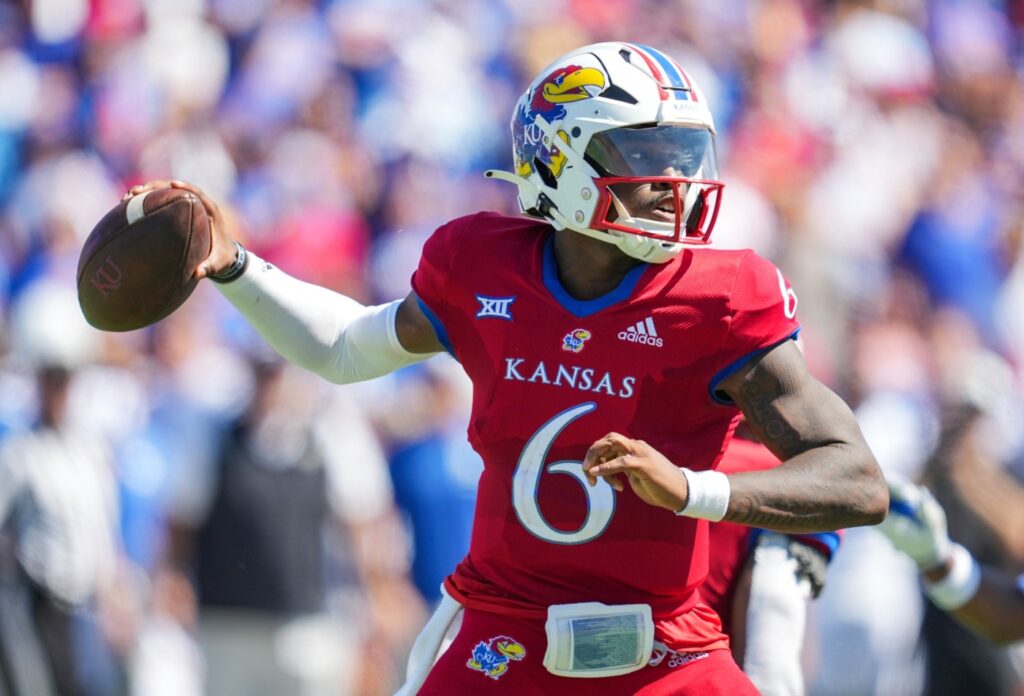 Look out, Toto; the Jayhawks are 4-0 and playing in technicolor, and it’s starting to feel like it’s not even Kansas football anymore.

That’s thanks largely to the wizardry of a quarterback from Lawndale.

An introduction: Daniels is a 6-foot, 215-pound junior, a winner with a megawatt smile that’s getting a lot of work lately.

Because he’s doing it again, helping steer a football program to new heights, contributing to a can-do culture where great ambitions are both believed and achieved.

The first time, in 2018, he stepped onto campus as a junior and quarterbacked a talented Lawndale High team to a CIF Southern Section Division 5 title and CIF State 2-A title.

Now he’s helping Kansas pull out of a decade-long nosedive that was severe even by its standards, as a program that’s reached a bowl game just 12 times in its 122-year history.

This year is different. The Jayhawks are cruising, undefeated through four games for the first time since 2009. They’ve already done more winning than in any season since ’09, which was also the last time they sold out 47,000-some capacity David Booth Memorial Stadium – until last week, when they beat then-undefeated Duke, 35-27.

Daniels is No. 2 in ESPN’s Heisman Trophy standings, having already accounted for 15 touchdowns (and just one interception) in four games while producing a sublime adjusted quarterback rating of 98 (of 100) going into Saturday’s game against Iowa State (12:30 p.m., ESPN 2).

None of that is a shock to people who knew him at Lawndale; they say they’ve been waiting for his breakthrough.

Paula Hart Rodas, the former Lawndale principal, is another believer.

Daniels’ contributions in high school helped the Cardinals football team level up in ways that lift a whole school. Understand, enrollment was declining when Hart Rodas arrived in 2014. To combat that, it became a goal of hers and Athletic Director Demetre Howard to bolster activity and athletic programs.

And a state title in football? Can’t get a bigger boost than that – though being able to claim a Heisman candidate is pretty good too.

“We knew early on that what we were getting out of him in high school was only the tip of the iceberg, that he was going to continue to grow and evolve and really become something quite special,” she said. “And now it’s playing out right in front of our eyes.”

In front of our eyes – on TV. He’s making his mark in the midwest because Eastern Washington was the only West Coast school among Daniels’ college suitors. The compact QB initially committed to Middle Tennessee before changing his mind and deciding he belonged at Kansas, where coming into this season he’d lost a dozen games and won only once.

So prep precedent aside, the good people of Lawndale will have to forgive the rest of us for our raised eyebrows.

The one win, though. That should have been a hint.

The 57-56 overtime shocker against Texas last November ended Kansas’ 56-game conference road losing streak, was the Jayhawks’ first victory at Texas and just their third ever against the Longhorns.

Daniels completed 21 of 30 pass attempts for three touchdowns and added another 45 yards and a score on the ground.

It wasn’t a fluke. It was a premonition.

“I’m glad we showed a lot of grit and a lot of fight towards the end of the season,” he told reporters last year, after the Jayhawks’ first season under Coach Lance Leipold concluded. “But next year I want to come in with a bang. I want to start off exactly how we finished off this season. I want to be able to compete with every team in the Big 12, no matter who they are, I don’t care the name.”

A month into this season, fans across the country – including on the Kansas campus where basketball has long reigned – know Daniels’ name.

Outside of Lawndale, he wasn’t nearly as heralded two seasons ago, when Kansas went 0-9 and he was one of 27 true freshmen playing for then-coach Les Miles.

Just 17 years young, Daniels finished that season with a 50% completion rate and threw just one touchdown and four interceptions in seven games. He averaged a scant 0.3 yards per carry. And the Jayhawks gave up 47 sacks – seven more than any other FBS team.

“They had some really ugly losses, hard to watch, and I’m like, ‘Oh, Jalon’s gonna get hurt!’” Hart Rodas said. “But we watched, and we knew, they’re freshmen, they’re gonna get better.”

Leipold took over last year and with offensive coordinator Andy Kotelnicki instituted an innovative attack that Daniels told reporters this week reminds him a little of what Lawndale ran. It’s proving again how hard it is to stop a strong-armed mobile quarterback who’s also plenty cerebral.

“When he got here, he told me he wanted to be Aaron Rodgers,” Clark said. “We laughed about it. And I said, ‘That’s great. You can be Aaron Rogers, but we’re gonna add some Michael Vick to your game too.’”

Now Daniels – who has rushed 38 times for 326 yards and four touchdowns in addition to completing 71% of his passes – is talking to ESPN about his favorite Heisman winners, a couple of QBs with whom he has plenty in common: Florida’s Tim Tebow “because he was able to run a lot … made a lot of things happen,” and current Alabama star Bryce Young “because he’s from California (Mater Dei High) as well, and we’re basically in the same grade, same age.”

What an epic story it’ll be if the Kansas Jayhawks’ QB is still in the Heisman conversation late this season – even if the people at Lawndale will tell you, they already knew it.

For those new to the JD6 train… pic.twitter.com/nXhCLrOdab