Aaron Pico geared up for Bellator 286 in Long Beach 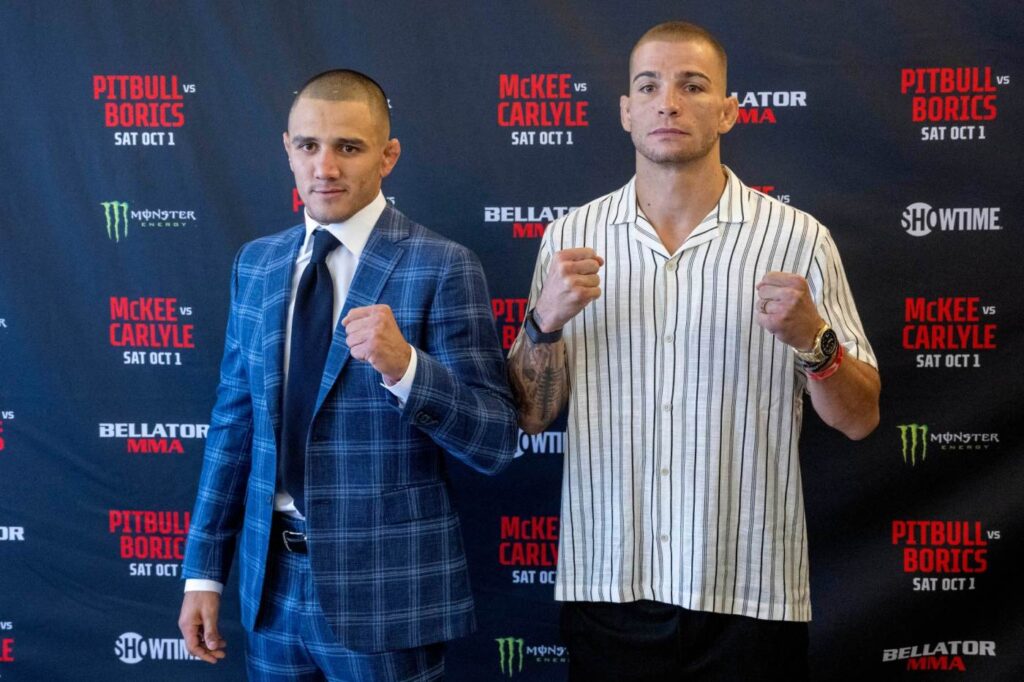 When Aaron Pico first walked into Jackson Wink MMA in Albuquerque in 2019 to see if the renowned gym would be the right fit for him, the legendary coach whose name is on the building gave his future pupil a blunt assessment of his struggling career.

“You’re a Ferrari but you’re driving like a sedan,” Greg Jackson said.

Pico, a one-time world-class wrestler who was all but destined for superstardom when he was 17 and signed his lucrative contract with Bellator MMA in 2014, had indeed sputtered to a 4-2 start.

Three years later, after Pico had brutalized Adli Edwards for nearly all of three rounds at Bellator 277 in April in San Jose for his sixth consecutive victory, Jackson sat nearby while Pico was being interviewed. Already satisfied with the TKO victory, Jackson quietly nodded while listening to his prodigy’s answers.

“He’s a Ferrari driving like a Ferrari,” Jackson later confirmed.

Now Pico takes the affirmation and confidence of what he has under the hood into Bellator 286 against Jeremy Kennedy on Saturday night at the Long Beach Arena.

Both are highly ranked featherweights just a victory or two away from a potential title shot. That, however, is not Pico’s focus.

“I’ll be honest with you. I don’t even think about that. I honestly just focus on being and getting better each fight or one at a time,” Pico said after his Edwards victory. “Maybe some people are like, ‘Oh, you need to call for the championship,’ No, I’m focused on being and getting better. And when the time comes, we get to be champion, I’m going to do it because I’m going to be ready.”

Those were the words that elicited a knowing approval from his coach five months ago. Jackson and Brandon Gibson have been chiefly responsible for overseeing Pico’s career since mid-2019. After one hiccup shortly after joining Jackson Wink MMA against Adam Borics – who is challenging 145-pound Patricio Pitbull in the Bellator 286 main event – Pico (10-3) has rattled off three knockouts, two submissions and a unanimous decision.

Just because the championship aspirations aren’t the first things out of Pico’s mouth, do not underestimate his thirst to be the best.

“We just got to keep him tuned now, like he wants to drive all the time. We’re gonna put him in the garage sometimes and be like, ‘Listen, let the motor rest.’” Jackson said. “He’s an animal, this guy.”

Pico’s original opponent for Bellator 277, Kennedy arrives with 17-3-1 record that includes a 3-1 run in the UFC that ended in 2018 with his first pro loss – via second-round TKO to future featherweight champion Alexander Volkanovski in Perth, Australia.

In fact, three of his four UFC fights were in his opponents’ hometowns, including Brazil and New York, so taking on the Whittier native in Long Beach won’t faze the 30-year-old Canadian.

“I’m not too worried about the crowd. It’s going to be all noise when that door closes anyway,” Kennedy said. “Even if it’s all for him, I’m just excited to get that energy.”

After leaving the UFC and going 4-1 with one no contest in Brave CF and PFL, Kennedy has gone 2-1 in Bellator, also losing to Borics, via unanimous decision in April 2021. A broken orbital bone sidelined Kennedy two weeks before his originally scheduled fight with Pico, so he describes the lead-up to Saturday as essentially two camps to prepare for a fighter he regards as “a dangerous threat.”

“He’s an intimidating guy and he definitely has all my attention. I’m not intimidated,” Kennedy said. “I’ve been there, done that, in that sense of we’ve been on the winning side, the losing side, the other side of the world. Every promotion you can think of. So it is one of those things where I’m just I’m relaxed, I’m having fun, I’m enjoying this entire process.”

Pico, 26, says he is coping with the pressure of fighting in Long Beach, not far from where he attended St. John Bosco in Bellflower as a freshman.

“I feel the nerves. I’m a little scared. But that’s normal going into a fight,” Pico said. “I’m keeping my butterflies under control, I’m staying focused and I’m ready to go execute all the combinations and all the work that we’ve done on the ground.

“I’m ready to go out there and show the world that I’m ready to be Bellator’s next great champion.”

Note that Pico said his actions will lead to his title shot. No amount of jawing, chest-thumping or press clippings will get the job done.

Pico believes in himself and his team. He knows the course. And the Ferrari’s checkered flag is in sight.

“Every path is different. And the day you realize that is the day you’ll be a happy man,” Pico said.