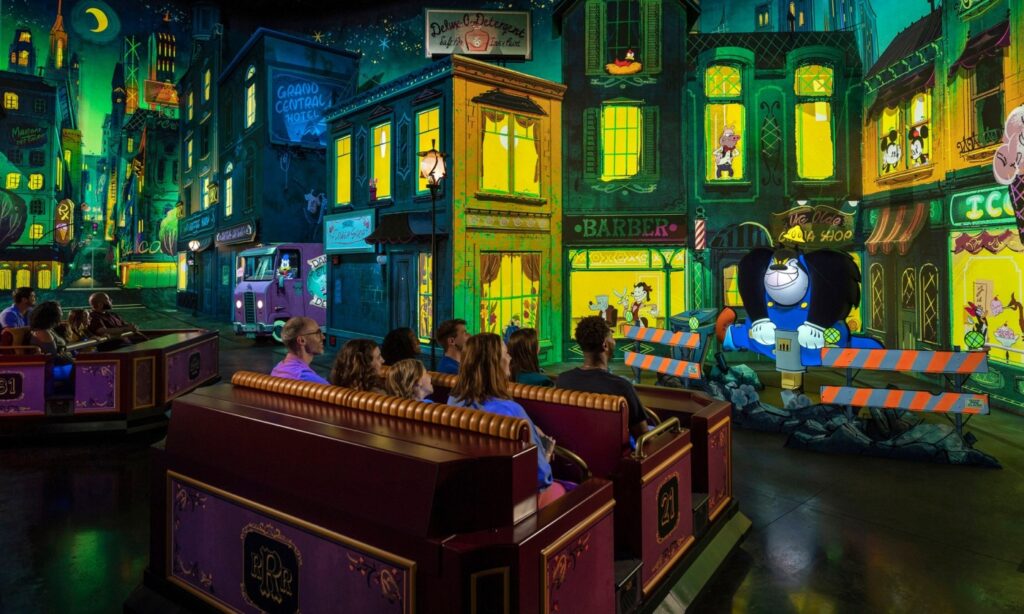 The new Mickey & Minnie’s Runaway Railway dark ride coming to Disneyland is sweet, fun, charming and frenetic — just like Mickey and the next-generation cartoon shorts that inspired the attraction.

The new Mickey & Minnie’s Runaway Railway debuts on Friday, Jan. 27 at Disneyland with previews held for the media and Disney employees in the days leading up to the official launch.

I rode Mickey & Minnie’s Runaway Railway in March 2020 when the trackless dark ride opened at Disney’s Hollywood Studios in Florida just before the COVID-19 pandemic shut down Disney theme parks around the globe.

Sign up for our Park Life newsletter and find out what’s new and interesting every week at Southern California’s theme parks. Subscribe here.

Spoiler Alert! What follows is a detailed preview of the Mickey & Minnie’s Runaway Railway attraction coming to Disneyland. Consider yourself forewarned.

The new ride that will serve as the centerpiece of the reimagined Mickey’s Toontown at Disneyland will be virtually identical to the East Coast version of the attraction.

SEE ALSO: How Disney pulled off the technical feats in Mickey and Minnie’s Runaway Railway

The varying facades mean the Florida and California attractions will have different opening acts. While the East Coast version of the ride continues the Chinese Theater motif through the attraction lobby, the West Coast version will feature cartoon props from Mickey Mouse’s animated film and TV career after riders enter under Toontown’s El Capitoon Theater marquee.

Concept art for Mickey and Minnie’s Runaway Railway in Mickey’s Toontown at Disneyland. (Courtesy of Disney)

SEE ALSO: Disneyland has fewer low-priced days so far this year — but that’s about to change

Mickey & Minnie’s Runaway Railway captures the chaos of their cartoon shorts in a fun family ride that gets better with each ride — the true sign of great theme park attraction.

Designed with families and kids in mind, the first theme park ride ever dedicated to Mickey Mouse takes riders on a topsy-turvy journey aboard a runaway train that encounters hurricanes, waterfalls and stampeding bulls.

Riders board train cars behind a steam engine operated by Goofy — an early indication that things are not going to go according to plan.

During the journey, the four trackless ride vehicles split apart and follow their own paths — meaning the front car offers a completely different perspective from the back car. Riders in the front car often catch the beginnings of scenes that riders in the back never see and vice versa — with rear cars catching details front cars completely miss.

There’s so much to see in the new attraction that riders will have to ride Runaway Railway dozens of times to catch everything unfolding in the 360-degree panoramic views surrounding them.

The “trackless” portion of the ride allows the train cars to disconnect from the locomotive driven by the hapless Goofy. As you might expect, things immediately go awry and the train cars end up getting caught in a twister, washed over a waterfall and joining a dance recital. Riders sit in four train cars that frequently change order and position throughout the madcap journey. The trackless ride vehicles constantly make unanticipated twists and turns with enough force to send riders sliding back and forth along the bench seats, bumping into their neighbors beside them.

The pre-show “Perfect Picnic” cartoon short ends with a blast that lets riders enter a barn through a surprise entrance that suddenly appears in the film screen amid a cloud of smoke. Look away for a brief moment and you’ll miss the eye-popping special effect.

Concept art of the Mickey and Minnie’s Runaway Railway coming to Disneyland. (Disney).

Riders aboard the train join Mickey and Minnie as the couple sets off in a convertible red sports car for a romantic picnic in Runamuck Park. What could possibly go wrong? Needless-to-say, everything runs amok just around the first turn in the track.

The dark ride’s scenic sets have an off-register, hand-drawn look designed to mimic the style of the new Mickey Mouse shorts playing on the Disney Channel. This isn’t the Mickey Mouse character you might recognize walking around Disneyland or the black-and-white cartoon mouse from 1928’s “Steamboat Willie.” This is a wildly comic, frenetic and manic Mickey who opens Minnie’s mouth wide open with both hands and shoves an entire picnic lunch down her throat in a single gulp.

The animatronic versions of Mickey and Minnie in the attraction will take some getting used to. Mickey & Minnie’s half-faces are shown in profile much like their two-dimensional cartoon characters. The twist: The three-dimensional characters’ animated faces are rear-projected onto half-domed screens sitting on their shoulders. The result: The Mickey and Minnie animatronics look off-putting — even in this off-kilter world.

A model of the train car featured in the new Mickey & Minnie’s Runaway Railway attraction coming to Disneyland’s Toontown. (Photo by Drew A. Kelley, Contributing Photographer)

The twister sequence in the attraction perfectly illustrates the balanced blend of new and old technology that Disney masterfully combined in the new attraction. Projection technology in one scene shows the digital backgrounds swaying amid blustery wind effects. Those winds appear to blow the ride vehicles into the next room where a spinning three-dimensional twister catches Mickey, Minnie and Pluto in a funnel cloud.

Another masterful sequence shows the genius of using projection-mapped digital backgrounds. A thundering volcano scene appears to push the train cars into a domed-screened room where riders plunge over a rushing waterfall. After the over-the-falls visual effect, the trackless train cars return to the same volcano room that has now been completely transformed into an underwater scene complete with a trumpet-playing octopus.

The final catastrophic scene inside a factory quickly transforms before riders’ eyes with box-like screens that once displayed menacing machinery folding like collapsing fans into verdant evergreen trees.

The best scene in the ride: A comic cityscape chock full of eye candy and Easter Eggs that will send fans racing back into the queue to ride Mickey & Minnie’s Runaway Railway again and again.

SEE ALSO: Disneyland digs into the roots of Walt Disney’s imagination with his Dreaming Tree

Of course, the chaos concludes with a happily ever after ending that finds Mickey, Minnie and Pluto finally getting to enjoy their picnic lunch next to a babbling brook.

Riders appear to exit through the same hole in the movie screen where they entered, now with “The End” written across the cartoon short credits.