Alexander: How Michael Herrera went from APGA to the PGA this week 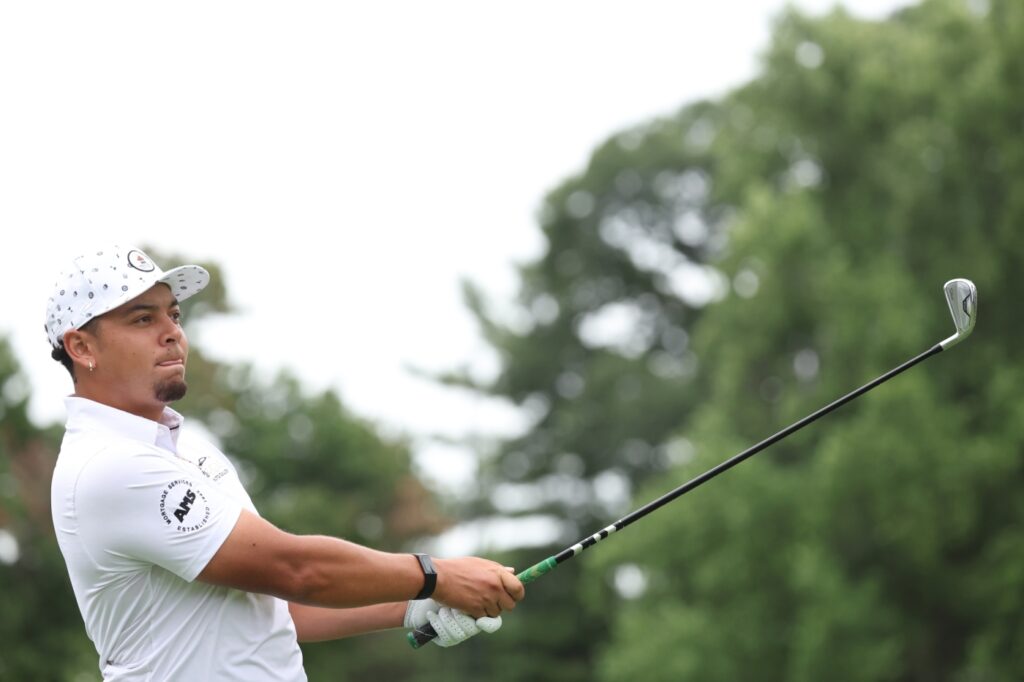 MORENO VALLEY — Sometimes the origin stories take place where you least expect them.

Cottonwood Golf Center is a small and modest municipal layout, a nine-hole, par-28, 1,175-yard course tucked into a residential neighborhood here. You exit the 60 at Frederick (if going eastbound) or Pigeon Pass (westbound), and head south past a shopping center, an apartment complex, housing tracts, low-slung office buildings and a community park. Finally, there it is on your right, just past the 99-Cent Store.

It’s an inexpensive place to get in a quick round. It’s also where Michael Herrera became intrigued about the game. Should he make the cut in this week’s Farmers Insurance Open at Torrey Pines, which begins Wednesday, maybe the CBS commentators will give Cottonwood its 15 minutes of fame on Saturday’s final-round telecast.

Herrera is in the Farmers field, his first PGA Tour event, on a sponsor’s exemption after making an impact on the Advocates Professional Golf Association tour, a nonprofit designed “to prepare African Americans and other minority golfers to compete and win at the highest level of professional golf, both on tour and in the golf industry,” according to the organization’s website.

Herrera, 24, has enjoyed success on the APGA tour and also has earned conditional tour cards through qualifying school for PGA Tour Canada and PGA Tour Latinoamérica. There seems to be one hurdle left to clear.

And the genesis of all of this? Those family car rides that passed by Cottonwood Golf Center all those years ago.

“Every time my parents took me to the mall, we’d pass it by,” he said. “I didn’t know what was going on, but I saw the flags and the grass and people walking around.”

Every time they went by, he recalled, he asked his dad, Hugo, if he could play. For a while, his dad brushed it off.

“To have the opportunity to go out there and see what golf is like, it’s a great starter course.”

Green fees there are probably a little more expensive than $5 now, but you get the idea. It’s still a bargain.

Anyway, Herrera was hooked. He developed his game through the First Tee program, and was a member of the golf team at Valley View High and then at Riverside City College in addition to playing basketball. That came from his dad, too; Hugo had been a member of the Guatemalan national basketball team.

But as much as Michael loved hoops, his future as a 6-foot guard, even as a high scorer at Valley View when he averaged (18.7 points, 4.9 rebounds, 3.9 steals and 33 percent from beyond the 3-point line as a senior, wasn’t going to be as promising as his future on the golf course. And not only did RCC basketball coach Phil Mathews nudge him toward playing golf full-time, but he hooked Herrera up with APGA executive director Kenneth Bentley.

Since Herrera was averaging 4.7 minutes a game at RCC, it was the right call.

“I had to cut him from the basketball team because he was too good at golf to play for us,” Mathews said. “He needed to pursue golf full-time.”

Said Herrera: “I went back to Coach Mathews and he told me, ‘You can still play basketball, but you’re not gonna have the opportunities you have in golf.’ Being realistic, I’m only 6-foot and I didn’t jump outside the gym. I could have a career overseas, but the main goal is the NBA and that was a tall, tall task.

“The first year, I played both sports. The second year, golf was my main focus.”

But it’s good to have connections. Bentley, who spent more than three decades as a vice president at Nestlé, and Mathews are longtime friends and were college roommates at UC Irvine.

“When Phil Mathews … called me and said he had a player on his team who could be a PGA Tour player, I laughed,” Bentley was quoted in a story on the APGA website, adding that Herrera has the “talent and a burning desire to succeed.”

So Herrera met Bentley at L.A.’s Wilshire Country Club, and the executive was impressed by the young man’s game and poise and invited him to play in an APGA event as an amateur. Herrera had a top-10 finish there and turned pro in August 2019.

Early on, playing with a mixed bag of equipment and trying to get into as many events as he could, Herrera did “a lot of losing,” he said, while learning to practice and train the right way.

But he proved to himself that he’d made the right decision in his first pro event, the 54-hole Arizona Open at Superstition Mountain CC in Gold Canyon, Ariz., on the outskirts of Phoenix. He came down to the final two holes of the second round one under the cut line, responded with a birdie on the par-3 17th and an eagle on the closing par-5 to survive, and finished tied for 49th to earn a check for $725, his first pro payday.

“At the start, I wasn’t sure it was the right decision to go pro,” he said. “That was kind of the moment for me where I said, ‘You know what? I think I can do this.’ That gave me confidence that I made the right decision.”

While his first full pro season was a struggle, he finished seventh in the 2020 APGA Championship at Industry Hills. The following January, he finished tied for the lead in a one-day event at the Crossings at Carlsbad, losing to Landon Lyons in a playoff but starting a year that featured what he called “a good amount” of top 10 finishes.

Along the way, Herrera picked up a prominent sponsor in College and Pro Football Hall of Famer Ronnie Lott. This was another example of right place, right time; Herrera was helping out at the Cedric The Entertainer celebrity tournament in August 2021 and struck up a conversation with Lott while the latter’s group was waiting to tee off.

The upshot: Lott agreed to sponsor Herrera and introduced him to his agent, and since then other sponsors have followed suit. That removed the burden of figuring out how to make ends meet on tour – for a while Herrera said he and his dad shared his expenses and split his winnings – and the result seems to have been improved performance.

Herrera earned his first outright APGA victory at the TPC Scottsdale course in April, and he finished that season ranked fourth in the tour standings with nine top-10 finishes in 12 tournaments. But the invitation to join the PGA field at Torrey Pines, which was extended in early December? That caught him by surprise.

.@APGA_Tour member @Mik3_love14‘s first time attending a @PGATOUR event was at the @FarmersInsOpen. This year, he will receive an exemption to compete in it. Farmers® is proud to support players like Michael, working hard to achieve their dreams! pic.twitter.com/bb2Qbp2oVY

“A complete shock,” he said. “I knew I had the possibility of getting it, but it was between me and three or four others. I didn’t know if I was going to get it. … It didn’t feel real for a long time, but it feels real now.”

The Farmers, incidentally, was the first PGA Tour event he attended as a fan. Obviously, fate has a way of making things happen just so.


Alexander: Rahm outlasts the field to win in the desert again

And beginning Wednesday? He’s not coming to Torrey Pines just for the experience.

“Just hoping to at least get to the top 10 so I can get to the following week,” he said. “Outside of the top 10, I go back to the minitour. Anything else, at least I can know that I left everything out there.”