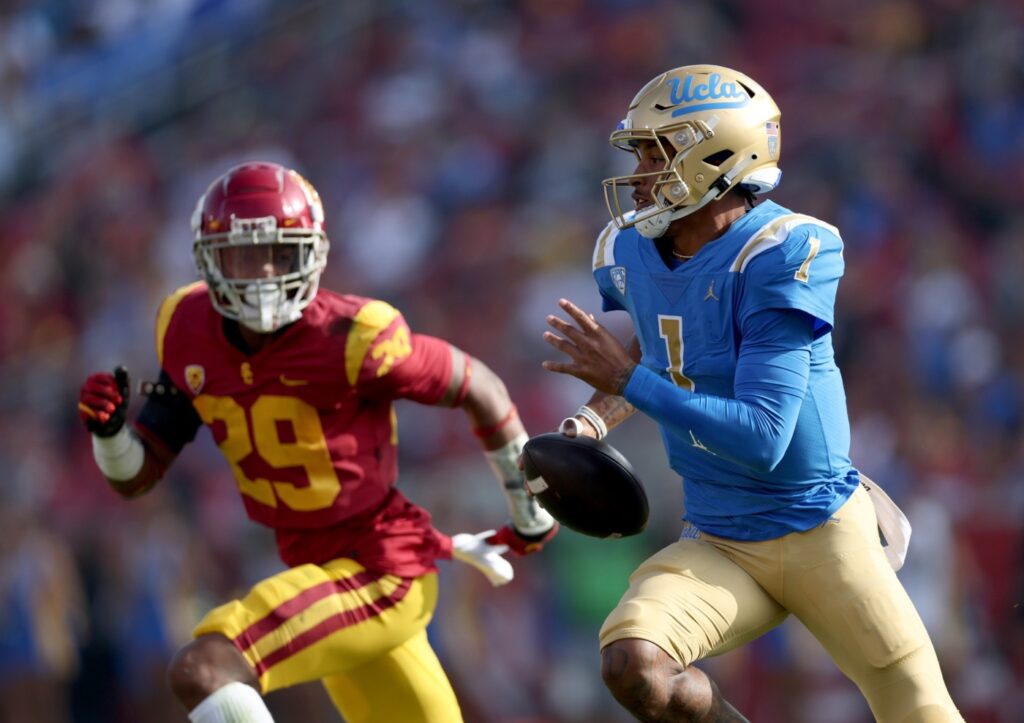 LOS ANGELES — Crosstown rivalry week had barely even begun when the first shots were fired Monday morning from Westwood to South L.A.

“Obviously we hate those guys across town, it’s a bitter feeling with those guys,” UCLA quarterback Dorian Thompson-Robinson said. “We want to be even better, we want to break 60 [points] and all that stuff.”

The stakes are high enough this week. No. 7 USC and No. 16 UCLA will face each other in their annual rivalry Saturday, with both programs ranked in the Associated Press for the first time since 2014. Should the Trojans win, they would clinch a spot in the Pac-12 championship while eliminating the Bruins from contention.

And then there are the circumstances of the past two games between these teams.

Last year, UCLA scored a record 62 points in a humbling win over the Trojans at the Coliseum, capped off with Thompson-Robinson signing a hat for a USC fan after a touchdown. The year before, USC scored three fourth-quarter touchdowns to rally from 12-point deficit to win at the Rose Bowl.

It’s the aftermath of this game that seems to have stuck with Thompson-Robinson the longest.

“I remember it clear as day, cussing at us, flipping us off, as disrespectful as you can get,” Thompson-Robinson said Monday. “So we’ve got to go out there on Saturday and do the best we can to win this game.”

For USC’s part, the words from Thompson-Robinson did not seem to penetrate the Trojans’ locker room prior to media availability Tuesday.

“He said that?” safety Calen Bullock said when informed about the 60-point proclamation. “He have his own opinion. We know what we’re about to go out there and do. We’re about to execute. I know that’s not gonna happen.”

“I really have nothing to say to that,” defensive end Nick Figueroa said.

“Who wouldn’t want to put 60 up on us? We’re USC,” added receiver Jordan Addison. “But they’re going to have to stand behind that. He’s gonna have to stand on them words.”

Addison returned for USC in Friday’s win over Colorado after a two-game absence due to a leg injury suffered against Utah. In the moment, the injury looked like it had the potential to end Addison’s season due to the angle at which his leg bent.

The junior receiver wasn’t sure he would be able to return so quickly, either.

“I first I thought it was gonna be longer than what it was, just how it looked and how it felt coming down on the sideline. But we have great trainers and they helped me get back out here as fast as I could,” Addison said. “It just feels good to be back out there. It’s always tough to be on the sideline watching.”

Addison caught the first pass of the Colorado game, taking it for two yards, but was targeted only once more and did not make another reception. He said he always feels fully healthy come game time, but did not elaborate on whether he was still progressing back from the injury.

But Addison was thrilled with the way receivers like Tahj Washington, Kyle Ford and Michael Jackson III stepped up in his absence.


Pac-12 power ratings: Oregon falls from No. 1 and a look ahead to awards season


USC men’s basketball vs. Vermont: Everything you need to know

“I knew they was going to go out there and do their thing,” Addison said. “I told y’all we got a deep receiver room and whoever’s up is gonna make a play.”