What we learned from Chicago Bears offensive coordinator Luke Getsy, including a hidden moment of brilliance from Justin Fields 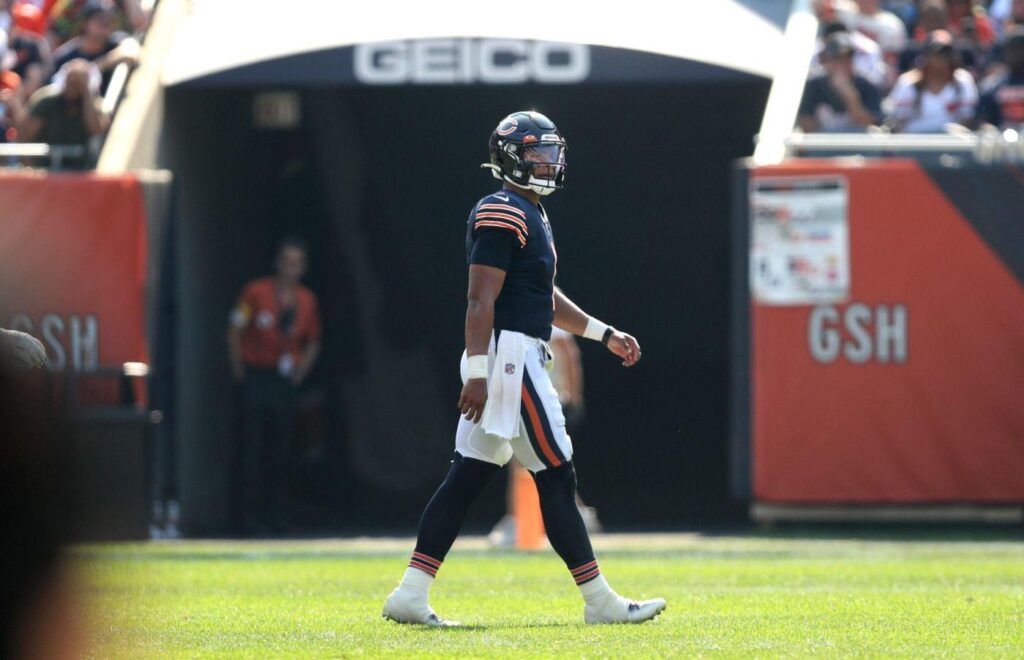 On Justin Fields’ biggest play of Sunday’s win against the Houston Texans, he was hoping for something even bigger. On the Chicago Bears’ fifth snap of their opening drive — third-and-9 from their 36 — Fields was confident receiver Darnell Mooney could spring free for a potential big gain on a deep corner route. But as much as Fields wanted that big play, Mooney was steered inside by cornerback Steven Nelson, and the two became tangled for a moment.

To the same side, Equanimeous St. Brown gained separation on a shorter corner route.

“But my feet just weren’t ready for that,” Fields explained.

Beneath St. Brown, Dante Pettis had plenty of cushion as he sat down on his route near the numbers 5 yards beyond the line of scrimmage.

Still, even with the cleanest pocket he had all day and ample time to throw, Fields never established the proper rhythm to throw and instead took off through the pocket then toward the left sideline, rocketing into the open field for what would become the longest run of his career — a 29-yard burst that sparked a Bears touchdown drive.

Fields was asked Wednesday how he processed that play and whether, during video review, he had recognized opportunities to pull the trigger to open receivers.

“I really just wanted Moon,” he said. “I thought it was a good matchup, but the corner ended up playing outside leverage.”

A day later, offensive coordinator Luke Getsy was asked for his feedback on that sequence.

“What you’d love to see him do is go all the way down (from Mooney deep) to Pettis there on the checkdown,” Getsy said. “But that’s who he is. When he has that moment to be able to create space and time (with his legs), we definitely don’t want to take that away from him. So I wouldn’t say he necessarily hung on to (Mooney’s route) too long. It’s just, OK, once that collision happened (between Mooney and Nelson), find your checkdown. And then if that wasn’t there, now it’s time to get out.”

These are the little moments, within failed plays and big gains, in which the coaching process at Halas Hall continues to be instrumental. Fields is off to a miserably slow start through three games, ranked 32nd in the league in completions (23), passing yards (297) and passer rating (50.0) and the wheelman of a sputtering offense that ranks last in total yardage.

Still, amid the frustration and the accompanying push to turn things around, the Bears are finding a handful of reasons to remain encouraged. Getsy spoke with reporters for 15 minutes Thursday afternoon in Lake Forest. Here are three things we learned.

1. No one at Halas Hall believes Justin Fields is consistently failing to pull the trigger on open passing plays.

Fields took exception to that suggestion Wednesday, which came immediately after he detailed his process on the 29-scramble.

“You’ve just got to listen to your feet and throw the ball on time,” he said.

Getsy echoed that sentiment Thursday, rejecting the premise that the coaching staff has shown a mistrust in its young quarterback with conservative play-calling.

“It’s not like we we’ve been intimidated to call a (pass) play by any means,” Getsy said. “We’re calling the game that we feel is best to attack with our matchups. … Sometimes we aren’t able to go five wide and spread people out because of matchups we have to deal with.”

The Bears chose to run the ball more than once against the Texans in third-and-medium or third-and-long situations. But Getsy emphasized that much of that was situationally dictated.

“It’s not the sexiest thing in the world to run the ball on third-and-6,” he said. “But when we feel like we have advantageous things playing into our hands, we’re going to do whatever it takes. Whether it’s a run, a pass, a screen, whatever it is — we’re going to do it. We put a lot of time into trying to find those matchups for ourselves and that’s part of it.”

Fields’ first quarter pick on a pass to tight end Cole Kmet up the seam was one of his ugliest moments in a shaky performance. But Getsy was impressed with Fields’ ability to adjust within the play to how quickly Kmet popped open.

“It happened much faster than we anticipated,” Getsy said. “Cole just popped.”

That required Fields to speed up in his drop in order to set up to throw.

“He actually did a great job of shutting his feet down,” Getsy said.

Fields’ pass, though, was nowhere near Kmet, caught instead by Texans safety Jalen Pitre. The Bears quarterback noted Wednesday that the ball slipped out of his hand a bit as he threw. Which, truthfully, shouldn’t buy him much forgiveness. Getsy also noted some mechanical glitches on the throw.

“He just missed a throw,” Getsy said. “We just have to make it where he doesn’t miss those throws.”

3. The production of the running game has been a major plus.

The Bears are averaging an NFC-best 186.7 rushing yards while also posting a 5.4 yards-per-rush average. For three games, they have committed to the run and been assertive in establishing control in that area with the offensive line playing nasty, the receivers contributing as blockers outside and Fields handling his pre-snap responsibilities well. For Getsy, that has been an impressive return on investment for what the Bears worked on all summer.

“From the very beginning, when we walked into training camp, we made that the focus of who we wanted to be and the way we wanted to play the game,” Getsy said. “And they have taken that by the reins for sure. Our play style reflects that. The way they are firing off the football, the way they are finishing, all that stuff. That was the No. 1 thing we said we were going to do.

“We wanted our tape to look a certain way, and those guys have definitely accepted that challenge and done a really nice job.”