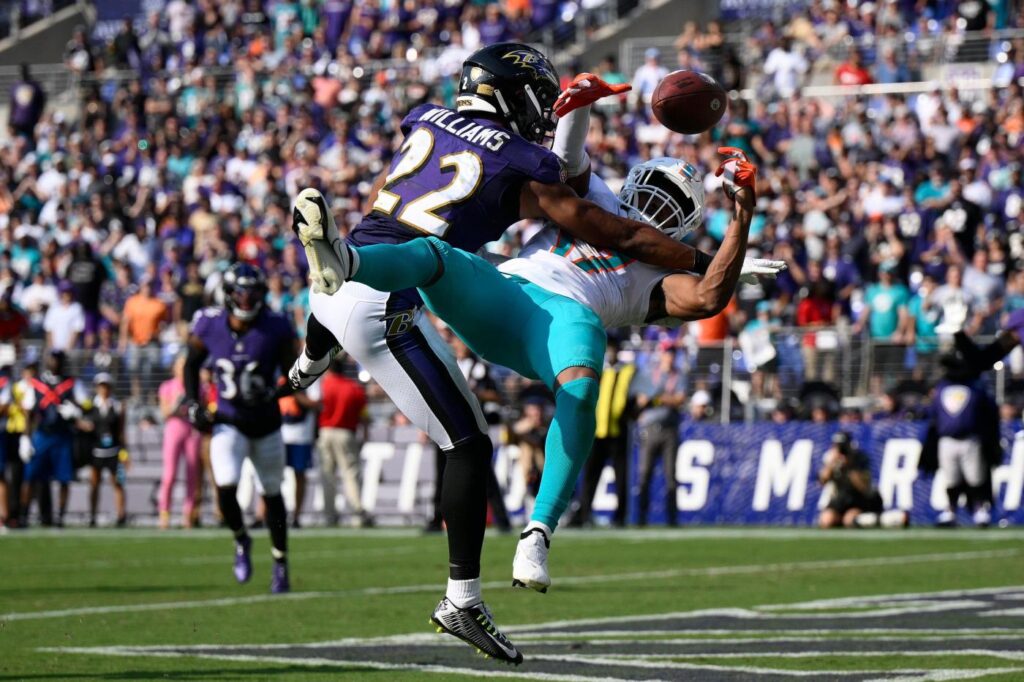 In the seconds after Marcus Peters cradled the ball within inches of the sideline, Kyle Hamilton let loose a roar from deep inside. A “primordial scream” Ravens coach John Harbaugh called it.

Hamilton had spent the previous week answering for his football sins, mental and physical, in a Week 2 collapse against the Miami Dolphins. When the rookie safety saw New England Patriots wide receiver Nelson Agholor break free on a potential go-ahead scoring drive in Week 3, he knew he could not let it happen again. So Hamilton chased Agholor down, and with a violent swipe of his arm punched the ball Peters’ way. It turned out to be the decisive blow in a hard-fought 37-26 road victory.

“That’s a play not too many people make,” Harbaugh said a day later.

If Hamilton, the first player selected in the Ravens’ 11-member draft class, goes on to a decorated career in Baltimore, this forced fumble might go down as his opening statement. It was a loud moment in a collective story that’s gaining momentum as Ravens rookies leap into the deep end of the pool a few weeks into their NFL careers.

If the Ravens build on their promising start and return to the playoffs with serious ambitions for the Super Bowl, first-year players will carry a significant load. The team’s decision-makers saw this 2022 draft class, which included two first-round picks and six fourth-round picks, as a major part of their plan for building a roster around quarterback Lamar Jackson, who’s about to become very expensive. But the process has accelerated more quickly than they could have anticipated because of injuries to veterans such as left tackle Patrick Mekari (ankle), nose tackle Michael Pierce (torn biceps) and cornerback Kyle Fuller (torn ACL).

Faalele, for example, had not played a single snap at left tackle at Minnesota and was regarded as a developmental prospect — albeit a historically massive one at 6-foot-8, 380 pounds — on the other side of the offensive line. On Sunday, he suddenly found himself protecting Jackson’s blind side against a Bill Belichick-coached defense.

His afternoon did not start out well. Twice on Faalele’s first two series, Patriots defensive end Deatrich Wise Jr. whipped around his left shoulder as if the rookie was stuck in concrete. Jackson seemed in peril, as did an offense that had been humming around him.

“It was definitely a different experience — baptism by fire,” a grinning Faalele said Wednesday.

So he practiced his sets on the sideline, trying to redial his perspective so he would be in tune with Jackson’s silent snap count and feel as comfortable on the left side as he had on the right. He’s a calm guy by nature, and by the start of the second half, he looked like a different player, one prepared to keep his quarterback off the ground.

“He hasn’t had snaps at left tackle; he’s been a right tackle all his life,” Jackson said. “And for him to get in and do an amazing job like that, when we need him, where it counts, it’s tremendous to see.”

“Yes, I feel calm,” Faalele said, looking ahead to a possible start against the Bills and the great Von Miller. “Especially when we prepare as much as we do here. I feel like I’ve seen every situation. I feel good about going against everything. I trust my teammates and my coaches. I am a calm person because of that.”

Faalele had at least played in an NFL game. Jones, the 6-4, 334-pound powerhouse from the University of Connecticut, missed the first two weeks as he recovered from a knee injury suffered in the preseason. He was active for the first time Sunday. Then Pierce tore his biceps, and Jones had to step in for 29 snaps. He made just one assisted tackle but looked like he belonged.

“Travis Jones played great,” veteran defensive tackle Calais Campbell said. “He’s a talented guy. His biggest thing is going to be experience. It’s not going to take him long; I think he’s just so gifted, and he’s going to make a lot of plays. But he’s going to get a whole lot better and in a hurry, hopefully. Obviously, there is going to be mistakes — everybody makes them; even 15-year vets make them — but he makes them big [in] the right way. If he doesn’t know what he’s doing, he blows stuff up, which you can appreciate.”

Likely received the most hype of all the rookies going into the season because of his steady stream of highlight catches in training camp and his overpowering performance in the Ravens’ second preseason game against the Arizona Cardinals. His introduction to the regular season proved rougher. He caught none of the four passes thrown his way and committed a holding penalty in the opener. After he bounced back with four catches in Week 2, he hurt his groin and caught just one pass for 8 yards against the Patriots.

“We’re throwing a lot at him; there’s a lot on his plate,” offensive coordinator Greg Roman said. “He’s had to do some dirty work as a young rookie in some of these games, but there’s nothing but a bright future for him in every sense.”

The team’s No. 3 cornerback spot has been the busiest center of rookie activity thanks to the season-ending knee injury Fuller suffered and more temporary health setbacks for starters Marcus Peters and Marlon Humphrey. Armour-Davis played 38 defensive snaps in Week 2, suffering his share of coverage defeats, and lasted for just nine against the Patriots after he allowed a pair of big gains by DeVante Parker. Williams, picked 22 slots after Armour-Davis in the spring, was beaten on Agholor’s crossing route that ended with Hamilton’s forced fumble. But he has generally played more consistently than his rookie classmate and now seems the likeliest candidate to play with Peters and Humphrey going forward.

CBS NFL analyst Charles Davis said the hiccups in the Ravens secondary — their pass defense is ranked last in the league, just like it was last season — are inevitable given injuries and the inexperience of players such as Armour-Davis, Williams and Hamilton.

“Younger players equal more mistakes. I don’t care who they are, where they come from, what their pedigree is,” he said. “You’re learning on the fly. You’re learning at a faster rate of speed. You’re learning against guys who are going to make bigger plays against you than 99% of the guys you faced in college. … They’ll evolve. They’ll learn. They’ll grow. If we talk about this in about six weeks, I don’t think we’ll see the same errors.”

Conversely, Linderbaum has been the source of zero drama, at least since he returned from a foot injury that kept him out for part of the preseason. The Ravens expected their second first-round pick to start from Day 1, and he has done just that. Despite a few rough pass-protection snaps against New York Jets defensive tackle Quinnen Williams in Week 1, Pro Football Focus graded Linderbaum the seventh best center in the league through three weeks. Like any standout offensive lineman, he’s good enough that we rarely talk about him.

Asked if his new center plays with acumen that belies his years, Jackson said: “He does. We watched film, and he was doing things — passing off blocks, going to the next ’backers, to the safeties. He was looking like a pro. You’ve got to watch the film; I can’t even describe how intense it was out there for him and how high he was performing. It looked incredible — just to see a rookie out there doing what he’s doing. It looks like he’s been here before.”

Hamilton, the first name the Ravens called in the draft, has taken more grief from fans than the rest of his classmates because of obvious mistakes in the preseason and the loss to Miami. He played just 16 defensive snaps against the Patriots, down from 38 the week before, but made the most of them, contributing to the Ravens’ excellent performance out of their dime packages and forcing the decisive fumble from Agholor.

Pro Football Focus graded Hamilton the seventh-best safety in the league through three weeks, and though that’s misleading, given that teammates Chuck Clark and Marcus Williams play every snap while he does not, he’s making a positive impact, critics be damned.

“Obviously, [he] had a learning experience the week before, as a lot of young guys did and do, especially on the back end,” Harbaugh said. “So, he worked hard all week, he had a sense of urgency to try to become a little bit better of a player this week than he was last week, and he became a much better player. To see him come up and make that play in that critical moment was kind of a reward for that.”

Asked to grade himself, Hamilton said his performance against the Patriots was his most consistent to date. “I’ve just got to stack them now,” he added. “Five games from now, we’ll probably forget this even happened.”